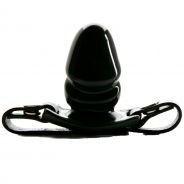 The mouthball’s size was small, the fastening strap should have been fixable. In the pictures, that attachment was not shown clearly enough, nor was the size of the ball.

Very good material, however, the band is a bit too long and does not have such good adjustment possibilities. Solved the problem by tying the ribbon instead of buttoning it with the buttons. Can be something big and strenuous to keep in your mouth for a long time. Learn more View less

All in all, we have been very pleased with this gag. However, in some areas it is different than expected, both in a positive and negative direction. The silicone that the gage itself is made of is very soft compared to other sex toys in silicone. Not that it necessarily does matter, but we expected it to be tougher on it. Incidentally, thematerial seems incredibly attractive on dust. The gag is pretty big in it, and personally I would probably have called it the 'advanced ball gag' rather than the 'beginner'.It fills a lot in the mouth, and if you have an easy time gagging, or if you have never tried a gag before, I would probably choose another type, e.g., an ordinary one.ball-gag. In addition, I think a ball-gag is a lot more flattering, as this fills a lot of the face with its large black back surface. But if you want to shut your mouthcompletely, this gag is excellent :) Although it takes up a lot of space in the back of the mouth, it is incredibly comfortable for the teeth and jaws, which can relax nicelyaround the 'bite piece'. So despite the size, it has worked fine for long term use. If you fasten it properly, it is also quite difficult to push out, unless you have yourhands free of course. Personally, I am not the big fan of velcro and have considered sewing a buckle in the place. But it has so much flavour and pleasure :) Learn more View less

This gag is nice soft and comfortable in the mouth. There is room for the teeth, so even after a long period of uninterrupted use, there are no problems for either teeth or jaws. It is excellent that the gag itself with push buttons can be released from the strap, which is fastened around the neck. This makes cleaning considerably easier and morehygienic. This is really a big plus. It has been previously noted in a review that this gag due to its large size should not be called "for beginners". This mustdepend on the individual mouth size. I do not think it is too big and on the contrary could have liked me a little more fullness. But it is an individual assessment. Theconnection between the gag and the strap is also so soft and well-made that no unpleasant marks occur in the corner of the mouth if the strap has been tightened for a longtime. Works really well Thanks to its good material properties and its fine workmanship, it is a quality product that can only be recommended to those who turn on that kind ofthing. Learn more View less

Really sexy penis-shaped gag that secures effectively against unwanted talk from the slave who is allowed to carry it. It fills so much in the mouth that there is no choice but to moan when it is fastened. The leather strap with velcro closure seems a bit flimsy at first glance, but when the gag is stuffed completely into the mouth, the strapholds it sufficiently in place - a properly bound slave does not get it out of the mouth with its own help. The silicone is nicely soft and very reminiscent of a real penis.The lucky slave can bite well in it without leaving marks, but will probably prefer to suck on it; o) Closest to the plate, the penis is made thinner so there is plenty ofroom for the slave's teeth and the slave can have it in his mouth for a long time without risking cramps in the jaws. For beginners or slaves who feel uncomfortable havingsomething far back in their mouth, you might have wished for the gag about an inch shorter - but if you are allowed to get used to this gag, you will easily be able to enjoyit for a long time. Learn more View less 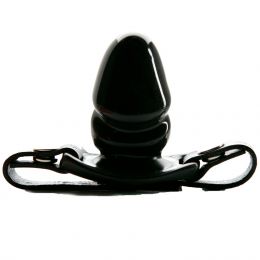