The naughtiest Advent calendar of the year has landed! Get it now and get free delivery - Buy now 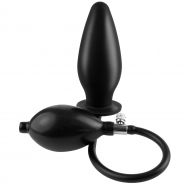 I bought the product about 3 years ago, and it has been in active use for about 2 years. At first, inserting the product felt awkward (this was my first pumping plug), but after a few times, it became easier to insert it. The material of the product is incredibly soft. In my opinion, for example, compared to the Mister B pumping anus plug, thisplug’s material is preferable precisely because of its softness. The Mister B plug, on the other hand, is stiffer. The pin gets pumped wonderfully big and it’s reallyfulfilling! However, the stopper was perhaps a little too small, which is why the product sometimes would slip completely inside. When I bought the product, its descriptionalso read that the product was waterproof, and that it could be used in the shower, for example. That was largely true. I took it with me to shower rooms several days a week(for many years), which eventually led to the plug’s draining valve to start acting up a little. Apparently limescale or the like had accumulated inside the valve.Eventually, after more than two years of active use, the product broke down, causing the seam in the stopper to fail, and air to leak out of the plug. Apparently, I pumped ita little too big ... Oops Learn more View less

Hard to get in, but it felt amazingly fulfilling once I got in. But there are still some potential improves in terms of quality, as the product broke down after just two uses, and it could no longer hold air inside. I do not recommend wasting money on this Learn more View less

I am very disappointed because, for one, it costs a significant amount of money, and I was looking forward to trying it. But after having tested it, I was left surprised and very disappointed. At first it felt wonderful to pump up and my whole body went into ecstasy from being totally filled while I caressed myself normally, but suddenly I feelthat the "base" of the plug disappeared in as well because it is so soft. I was almost unable to remove the plug later because the tube came loose when I tried toget it out. The "base" of the plug is far too soft to even be appropriate for the plug. Very disappointed :( Learn more View less

Good plug that can be blown up to a proper size. Stretches and fills nicely, which we both enjoy. It is firmly attached when it has got some air in it and does not go out when you have vaginal sex at the same time. Learn more View less 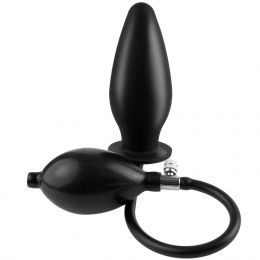